Originally printed in the Spring 2015 edition of Rutland Magazine, this article represents only a portion of the information I discovered in my research. It is my hope that one day I’ll be able to add to this story, either in a fuller non-fiction piece or a fictional one (both of which would include a little ghostly action…)

At the opening of the twentieth century, when a nickel plater named Edgar Wood had risen in society to become an attorney, Rutland was on the verge of complete electrification and bustling with industry. My home, one of the first built on the newly opened Garden Street (renamed Kendall Avenue) in 1887, was home to the Wood family for three-quarters of a century. Its lack of fireplace or chimney, the wrought-iron heating grates, parquet floors, rounded-cornered walls, and molded ceilings are all indications of modernization around 1912, in the midst of an era of great change—for the Woods, for Rutland, and for the country.

A skating rink?! Fourteen year old Florence Wood was no doubt excited to learn that the opulent Bicycle Club rink, built in 1884, would be within sight of their soon-to-be built family home on a new street bracketed by the grand Baxter estate on Grove Avenue and attorney Redfield Kendall’s lofty home perched high on the corner of Main Street.

What Florence couldn’t foresee was, even before her home was finished, the skating rink would be defunct and within a decade torn down. Neither could she know that the day-to-day life of her little family—the emotional details of which we will never know—would be a reflection of their times in a way only we, in retrospect, can now recognize.

Florence was eight years old when she moved to Vermont with her parents, Edgar and Leonie. It was 1878 and the height of the industrial revolution. The first gas motor engine was recently invented in Germany and Edison would introduce the light bulb to the world the next year. While Florence may not have been immediately aware of such advances, she would see her that home village was changing rapidly.

It was the heyday of the rail and marble industries, bringing jobs, people, and money to Rutland. New streets were scaled, water pipes laid, and plots of land made available to homebuilders. Living in one of the first towns in Vermont to make electricity accessible to all residents and offering the longest electric street car line in the state, Florence would have ridden the trolleys on the newly laid track. Forty years later, she would see it paved over again to make way for the automobile.

New social in-roads were being laid also. More charitable organizations, such as the Red Cross, Children’s Aid Society, and homes for elderly women, were established. The first Decoration Day, the fore-runner of our Memorial Day, was organized in Rutland in 1869 by the newly founded Roberts Post of the veteran’s organization, Grand Army of the Republic (GAR). Meanwhile, the Temperance Movement was educating against the evils of alcohol.

Edgar Wood was eighteen when he enlisted as a bugler in the First New Hampshire Cavalry. He had called orders in twenty-two battles before his horse was shot from under him. Nursing several broken ribs, he was bumped over rough roads for three days on a blacksmith’s wheeled forge before finally receiving medical attention. Eventually, transported north to a hospital in Brattleboro, Edgar recovered and discharged.

Edgar studied for a few years before he began working, settling in 1869 in Enfield, NH where he met and married Leonie Houston. A year later their daughter Florence was born. Moving his family across the mountain, he found employment at Howe Scale Works in 1878.

Florence graduated with nine girls and five boys in the class of 1888 of Rutland High School on Center Street. Unlike many young women of her time, Florence did not marry, but remained home helping her mother with her charitable work at the Rutland Missionary Association, which had been founded in 1862 by women “interested in the welfare of the poor.” In 1897 Leonie became the “third directress” of the Missionary’s Old Ladies Home on N. Main Street, and by 1911, the Director. Florence served as treasurer and later, secretary.

In 1900, eighteen years after a compulsory anti-alcohol education bill had passed in Vermont, essentially a dry state between 1853 and 1902, Edgar left Howe Scale to work for the town overseeing the sale of liquor. That year, the mayor, John D. Spellman, wrote: “I consider City Liquor Agent Wood an efficient and worthy gentleman in his position, but the office is a ruinous and demoralizing fraud on its face, and if the people would court the blessings of temperance, they would, with little or no ceremony, abolish it.” Despite the mayor’s high hopes, Edgar was busy enough to require the assistance of a young draftsman named Louis Fuller. Florence was also employed in the liquor agency’s office as early as 1900.

Louis had graduated from high school with Florence. A marble carver, he and his father operated Fuller and Son Monuments, but in 1898, the business folded. Louis found work at Howe Scale while he was assisting Edgar. In 1903, his wife of five years died, and five months later, his father did also. Three years later Florence and Louis married.

In 1903, Edgar became a veterans’ pension attorney “more closely associated with the interests of Civil War veterans than any other Rutland man,” and his longstanding membership in GAR positioned him to become commander of the Roberts post in 1904. In 1912, he was also promoted to commissioner of the liquor board.

Sadly, Edgar died five years later after he was hit by a car. The funeral was held at their home. In 1924, Florence moved into her former home with her husband to care for Leonie, who also died at home in 1927. Two years later, as the new high school was being built across the street, Florence stepped into her mother’s former position as director of the Old Ladies Home. By 1932 Louis was an engineer at Howe Scale. 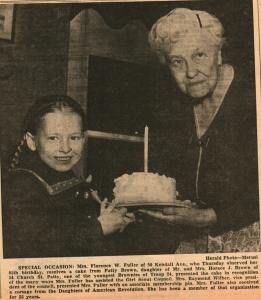 In 1945, around the time Florence retired from her directorial position, the Fullers acquired new neighbors. Norma (Keefe) Dikeman was only eight years old when her family moved in, but she remembers that it was “a wonderful neighborhood; all the mothers home, in their housecoats and aprons.”

“I never saw Mrs. Fuller, but I’d see Mr. Fuller out in the yard.” Norma recalls. “Very kind people. Never bothered anyone.” Soon after they moved in, the beautiful Crestwood Hotel, formerly the Baxter Mansion whose marble walls can still be seen along Grove Street, was to be demolished. “My mother was sad,” Norma remembers. “But Mr. Fuller, he said, ‘If something has served its purpose, then it’s alright to make room for something new.”

Including making room for a new family. Louis died in 1950 and Florence, who, even in her 80s, was a member of the Girl Scouts council, died thirteen years later at the age of 93. After 76 years, the house finally welcomed a new family in 1965.

So ends one family’s story. With a backdrop of a city at the height of its growth and economic strength, the experiences of those living at the House on Garden Street echo in small whispers some of the great historical shout-outs of the late nineteenth and early twentieth centuries, giving voice and life to the silent and blurred snapshots of Rutland’s past, and to the ghosts who live within these walls.

Originally published in the Rutland Reader starting in early 2013, and the "Remember When" column in the Rutland Herald/Times Argus in 2021, these posts focus on the history of Vermont. Also included are my historical writings from other publications and sites. Please enjoy! - joanna